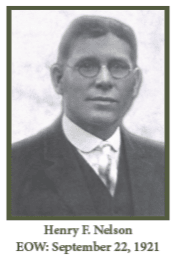 On September 22, 1921, Deputy Nelson and Deputy Theodore Crossley went to investigate a charge of hay theft in Bellville (a settlement north of Riverside). When they arrived at the scene, one suspect began shooting at the deputies. Both deputies were killed. Two suspects were later captured.

Deputy Theodore Crossley was the owner of a car dealership, which was located at the corner of Eleventh and Main Streets. He was deputized by Sheriff F. P.Wilson when he was elected.