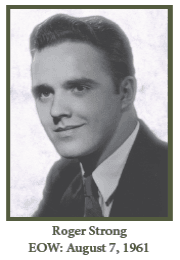 Deputy Roger Strong was employed by the Riverside County Sheriff’s Department for seven months. He was hired on January 1, 1961, and was assigned to the Blythe Station.

Deputy Strong began his career in law enforcement with the East St. Louis, Illinois Police Department in 1956. He moved to this area and began working with this department in 1961.

On August 7, 1961, Deputy Strong and Sergeant Ralph Gallagher were on a rescue mission in the desert. They were looking for persons who had become lost.

The rescue jeep that Deputy Strong and Sergeant Gallagher drove broke down and the officers began walking back to the highway. Deputy Strong was overcome by the heat and never regained consciousness.

Deputy Strong was survived by his wife and two children.