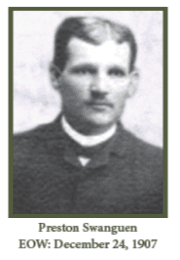 According to published accounts, the report of a ruckus on December 24, 1907, brought Constable Swanguen from the holiday dinner he was hosting at his home to a crowded pool hall in Temecula.

A popular figure who knew just about everyone in the small town, Swanguen left his weapon at home and walked the short distance to the hall. No doubt a word or two from the local lawman would be enough to calm the boys down, especially on a holiday evening.

Earlier that night, Joe Winkels, who owned the establishment, had thrown Horace Magee out of the business. Magee was known to have a violent temper when drinking and he, and many others, had started downing "red whiskey" earlier in the evening.

Winkels had been taunting Magee, calling him a half-wit, because he was half-Indian. When Magee got mad, Winkels had him tossed out and threatened to beat Magee if he came back. About 8:30 p.m. Magee returned - this time with a gun. Words were exchanged and threats were made, but Swanguen’s entrance seemed to calm the situation.

Magee walked toward the lawman, his hand extended in friendship. Swanguen either didn’t see the gesture or chose to ignore it. The constable did finally turn to take Magee’s hand. However, Magee had already pulled out his gun and opened fire. Two shots hit Swanguen square in the chest, killing him instantly.

In the panic that followed, Magee ran out of the bar. A mob gave chase and caught the gunman, clubbing him over the head with a pool cue.

Magee was tried and convicted for the death of the lawman and the businessman in a Riverside court and sentenced to life in prison at San Quentin. He spent 12 years there before being paroled. The slain men were buried at the Temecula Cemetery.